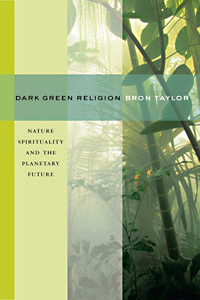 Dark green religion is like a phantom. It is unnamed and has no institutions officially devoted to its promotion; no single sacred text that its devotees can plant in hotel rooms in hopes of reaping a future harvest of souls; no identified religious hierarchy or charismatic figure responsible for spreading the faith, ministering to the faithful, or practicing its rituals.

Yet with alertness and the right lenses, the apparition appears.

It can be found in the minds and hearts of individuals who invent and are drawn to organizations that express its central convictions and moral commitments. It has charismatic figures and bureaucratic hierarchies devoted to its globalization. It is reinforced and spread through artistic forms that often resemble, and are sometimes explicitly designed, as religious rituals. It seeks to destroy forms of religiosity incompatible with its own moral and spiritual perceptions. It is considered dangerous by some, while others see it as offering salvation.

Dark green religion—religion that considers nature to be sacred, imbued with intrinsic value, and worthy of reverent care—has been spreading rapidly around the world. I label such religion "dark" not only to emphasize the depth of its consideration for nature (a deep shade of green concern) but also to suggest that such religion may have a shadow side—it might mislead and deceive; it could even precipitate or exacerbate violence.

Whether beneficent, dangerous, or both, such religion is becoming increasingly important in global environmental politics. It motivates a [end page ix in published book] wide array of individuals and movements that are engaged in some of the most trenchant environment- related struggles of our time. It increasingly shapes the worldviews and practices of grassroots social activists and the world's intelligentsia. It is already important in global environmental politics. It may even inspire the emergence of a global, civic, earth religion.

In 1859, Charles Darwin published On the Origin of Species, shattering traditional explanations of the fecundity and diversity of the biosphere. Religion would never be the same. Where this cognitive shift has been mostly deeply made, traditional religions with their beliefs in nonmaterial divine beings are in decline. Where traditional religions have not declined significantly, and to the extent their practitioners encounter societies that have adopted an evolutionary worldview, such conventional religions find themselves on the defensive. Yet the desire for a spiritually meaningful understanding of the cosmos, and the human place in it, has not withered away. Some find ways to graft evolutionary understandings onto long- standing religious traditions. Yet increasingly, new perceptions, both explicitly and implicitly religious, have filled the cultural niches where traditional religious beliefs have come to be seen as less plausible. This book provides detailed evidence that many of the innovative responses to the Darwinian revolution are forms of dark green religion.

After wrestling with the terms critical to its analysis and rattling assumptions about what counts as "religion," Dark Green Religion explores the early roots of dark green religion, especially in Europe and the United States. I focus especially on the century and a half since Darwin published his treatise. I analyze, as do most scholars, the material products emerging from the individuals and groups I study— writings, art, music, crafts, as well as newer modes of communication such as photography and motion pictures. In many cases I discuss, I have also interviewed the producers and personally viewed the productions, and so am able to provide a "you were there" intimacy unavailable from archival research alone.

Readers will not only learn afresh about streams of dark green religion in Europe that influenced America, they will also discover the spiritual dimensions of easily recognized environmental saints such as Henry David Thoreau, John Muir, Aldo Leopold, Rachel Carson, and many others. But this essential backdrop, while sometimes surprising, is just [end page x] the beginning. We will also consider whether radical environmentalism is a dangerous example of dark green religion . . . the sport of surfing a new, global manifestation of it . . . motion pictures, documentaries, and theme parks an influential expression of it . . . scholars and scientists key producers of and inspiration for it . . . and the United Nations its global champion. By the end of this global tour, readers can evaluate whether, in this age of globalization, such spirituality is rapidly spreading, virus-like, and if so, what its impact might be. In short, our journey will enable readers to consider whether the emergence and global diffusion of dark green religion is a harbinger of hope, or a portent of doom.
Continue to Chapter One
Page load link
Go to Top