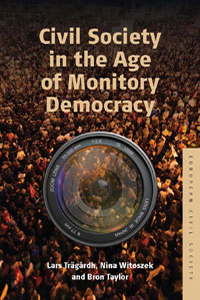 CIVIL SOCIETY
IN THE AGE OF
MONITORY DEMOCRACY

Since the emergence of the dissident “parallel polis” in Eastern Europe, civil society has become a “new superpower,” influencing democratic transformations, human rights, and international co-operation; co-designing economic trends, security and defense; reshaping the information society; and generating new ideas on the environment, health, and the “good life.” This volume seeks to compare and reassess the role of civil society in the rich West, the poorer South, and the quickly expanding East in the context of the twenty-first century’s challenges. It presents a novel perspective on civic movements testing John Keane’s notion of “monitory democracy”: an emerging order of public scrutiny and monitoring of power.

Bron Taylor’s chapter, “Kenya’s Green Belt Movement: Contributions, Conflict, Contradictions, and Complications in a Prominent ENGO”, explores the important African tree-planting movement, which became internationally famous in 2004 when its founder, Wangari Maathai, was awarded the Nobel Peace Prize. Since 1977, in Kenya and other parts of Africa, the movement has planted millions of trees in an effort to restore ecosystems, promote sustainable livelihoods, empower women, and promote democracy. While the movement has been widely praised and for good reasons, there have also been complications and challenges that undermine the movement’s objectives. Given the movement’s importance and because it shares many traits with grassroots environmental and social movements in the developing world, it is important to bring this important civil society actor into sharper focus and glean lessons from its history. Taylor argues that these movements will be more effective as they become more reflexive about the process and the epistemological principles that are best for arbitrating between competing perceptions, diagnoses, values, and prescriptions, and when they more self-consciously hybridize the best of human knowledge and experience, wherever it has originated.
Page load link
Go to Top