Professor Taylor is available for readings and presentations on a variety of topics.

His most popular presentations explore some aspect of what he has called post-Darwinian ‘dark green’ nature religion.

One title, for example, follows that of his book Dark Green Religion: Nature Spirituality and the Planetary Future. 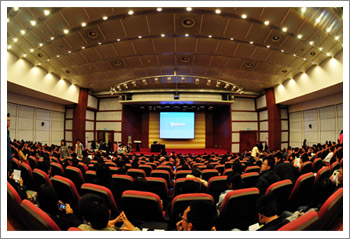 Here is a synopsis of this presentation:

Weaving sound, images, moving pictures, narrative, and analysis, including of the motion picture Avatar, which serves as an important recent example, this presentation explores “dark green religion.” This is the name professor Taylor invented to describe individuals and groups that consider nature to be sacred and intrinsically valuable, and that are based, in part, on an evolutionary/ecological understanding that everything is interconnected and mutually dependent. Those with affinity for such spirituality generally also have animistic and/or pantheistic perceptions, strong feelings of belonging to nature, and felt kinship with other organisms grounded in an understanding that all life shares a common ancestor. From such perceptions and feelings flow a conviction that our species should treat all other life forms with reverence and defend the earth’s bio-cultural diversity.

In this presentation Taylor provides examples of individuals (including artists, scientists, filmmakers, photographers, surfers, and environmental activists), and institutions (including museums, schools, and the United Nations), which are promoting such spirituality. Dark green religion is spreading rapidly around the world and is becoming increasingly influential in both local and international environmental politics, Taylor contends, and it is also influencing the world’s predominant religions and becoming an important part of the religious landscape. The presentation and discussion will provide an opportunity to consider whether dark green religion will decisively shape the future of religion and planet Earth, promoting the health and well being of all living things, or if such religion is actually politically, spiritually, and morally perilous.

Dr. Taylor presents on many other subjects, including:
Page load link
Go to Top