"Without a fascination with the grandeur of the North American continent,
the energy needed for its preservation will never be developed" ~ Thomas Berry
SECTIONS
REL 3103 & 5199: Thursday, Period 9-11 (4:05-7:05p.m.), Flint Hall, Room 119
INSTRUCTOR
Professor Bron Taylor (Ph.D.)
Email: bron@religion.ufl.edu
Office: Anderson 121
Office hours: Thursday 1:00-3:00 and by appointment
DESCRIPTION
Brief Course Description (in UF Catalogue)
Investigation of the ways that “religion” and “nature” have evolved and influenced one another during the cultural, political, and environmental history of North America since European Contact.
Précis 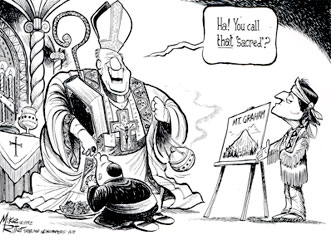 This course critically examines the roles played by “religion” and “nature” during the evolution of the cultural, political, and environmental history of North America. Specifically, it considers questions such as: 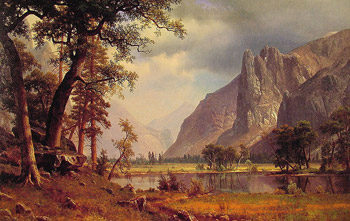 Albert Bierstadt, "Yosemite Valley", 1866
The course will draw on diverse sources, including ethnographies and other studies pertinent to America's aboriginal peoples, environmental histories that attend to the role of religion in landscape transformations, primary texts written by the figures most responsible for watersheds in the "religion and ecology" ferment in America, scholarly examinations of these figures and their influence, as well as studies of social movements engaged in the "greening of religion" or conversely, resisting religion-inspired environmentalism. A variety of theoretical issues and background articles, including biographies of many of the central figures to be examined, will be provided from The Encyclopedia of Religion and Nature (2005). Students will complete the course with a broad knowledge of nature-related American religious history, acquainted both with pivotal figures, movements, and critical questions.
Course Outline and Learning Modules 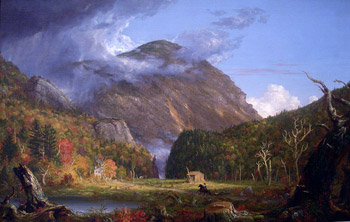 Thomas Cole, 1839
"A View of the Mountain Pass Called
the Notch of the White Mountains" 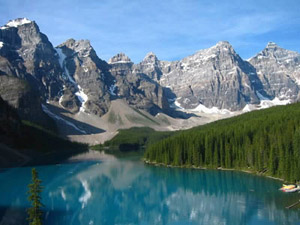 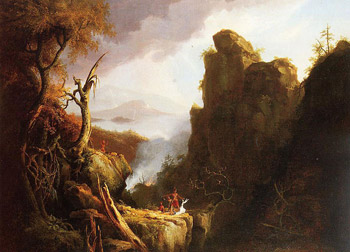 Thomas Cole, "Indian Sacrifice", 1826
Important Notes
This course is a hybrid, including both upper-level undergraduate and a graduate student sections. This has both disadvantages and advantages, but the course has been designed to amplify the advantages. It may be necessary to make adjustments to course readings and requirements along the way. The online version of this syllabus is the operative and binding version, so it is imperative that you use the online version, rather than versions printed out earlier in the class.
The quality of this course depends on the preparation and insights of every participant. Only in exigent circumstances may students be absent, and the instructor should be informed of any absence before the class that is missed, unless health and safety prevents such notice. Students are expected to be punctual, for this expresses courtesy and respect for your colleagues and prevents repetition of material presented in class.
Graduate Section
This course is a luxury in that the premium in it is the reading of primary and secondary sources that you will likely not have the opportunity to do in a similar way unless your research takes you in these directions. Consequently, it is what I call a ‘readings’ course. This means I do not require a research paper. Rather, I prioritize careful reading and class preparation, in-class presentations, and exams, which provide an opportunity to demonstrate careful reading and analytical insights. Here are the specific assignments:
* Alternative: Students wishing to write a standard research paper may do so, replacing this for assignment #2, above. In such a case both exams, and the research paper, will each be worth 30% of the course grade.
Important Notes 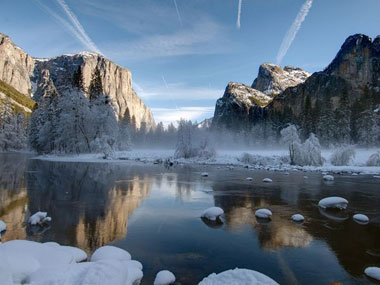 This course is an important one for Religion and Nature graduate students seeking competence in Occidental traditions in general and North America in particular. It is also an elective in the Religions in the Americas concentration. Given that other courses are offered that focus on Asian and Abrahamic religions, and do so making a priority of examining developments since 1970, the priority in this course is historical. The central objective is to illuminate broad cultural trends and nature-related practices and transformations, rather than attempting to survey the world's major religious traditions, and their natural dimensions, in America.
Course readings and requirements may be modified. The online version of this syllabus is the operative and binding version, so it is imperative that you use the online version, rather than versions printed out earlier in the class.
The quality of this seminar depends on the insights of every participant. Only in exigent circumstances may students be absent. In such cases, such an absence should be pre-approved by the instructor and the reasons documented. Students are also expected to be punctual, for this expresses courtesy and respect for your colleagues.
EVALUATION
Points Possible for Required Assignments
This chart shows the points it is possible to earn for each assignment:
UNDERGRADUATE SECTION
GRADUATE SECTION
Calculating Grades
For both the midterm and final exams, the total number of points earned by each student will be divided by the total number earned by the highest-scoring student. The resulting percentage will be used to calculate each student’s grade for the course. Put in a formula, it looks like this:
the score of each individual student (your score)
(divided by) the highest score earned by a student
The percentage arrived at by means of this formula will be evaluated according to the following scale:
This kind of scoring is fairer than many other forms of grading because: (1) It is based on what students actually achieve rather than some preconceived standard held by the professor; (2) Each student can receive a high grade; (3) Hard-working students will not be penalized for staying in a demanding course full of industrious students. With a traditional curve, demanding courses that “weed out” less industrious students, leaving hard-working ones, can unintentionally harm good students putting them in competition with each other. This will not occur in this course. To further insure fairness, any extra credit points will be added to the individual student’s score, only after the highest score earned by a student has been established. This ensures that the extra credit earned will not increase the difficulty of the grading scale.

Course instructor reserves the right to lower or raise course grades based on classroom contributions or upon absences. Instructor also reserves the right to change course requirements.
Late or Missing Assignments
Students who do not turn in study guides or reading analyses on the days they are collected will not receive points. The total number of points possible for the review essay will be reduced by 20% for each day it is late.
Returned Assignments
Assignments will usually be returned to students no later than one week after they were due. At the end of the semester, unreturned course work will be available for pickup in the Religion Department office in Anderson 107 for 30 days after the official date that grades are posted by the registrar. After this time, they will be recycled.
Academic Dishonesty
Students engaged in any form of academic dishonesty, as defined under the “Academic Misconduct” section of the Student Honor Code, will be subject to other disciplinary measures. Students are expected to know what constitutes plagiarism and to understand and avoid inadvertent forms of it that can occur by cutting and pasting quotations from various texts on the world wide web and elsewhere.
SCHEDULE
August Week 1 September Week 2 September Week 3 September Week 4 September Week 5 September Week 6 October Week 7 October Week 8 October Week 9 October Week 10 November Week 11 November Week 12 November Week 13 December Week 14
Note: All readings are to be completed before the class date/week under which they are listed. This schedule is subject to change so rather than printing it, I recommend bookmarking this online syllabus and consulting it regularly. To flourish in this class you must read widely and carefully.
(Week 1) 25 August

Starting with a question: Does surfing (ocean not internet) have anything to do with religion, nature, and ethics in North America? If so, why?

Native American and European cultures and nature from contact to the end of the colonial period.
Readings (all)
Readings (grads)
Website (more examples)
The website providing complementary resources for the book Dark Green Religion has additional examples of Surfing Spirituality, including the Ross Cummings video (also immediately below), music, and slide shows.
(Week 2) 1 September
Note: All students will submit by the end of Tuesday, 6 September, an essay on the readings (through those below) according to the instructions provided above. Since these will cover two weeks, undergraduates may take up to 1,000 and graduates up 1,500 words. Focus especially on Albanese & Nash (and Grad Students also on Stoll).

Readings (below) will explore the entwinment of nature and religion attending the birth of the republic.

The documentary The Faithkeeper (Bill Moyers interview of Oren Lyons) will be made available; view during the first two weeks of the semester.
Readings (all)
Readings (grads)
Recommended
(Week 3) 8 September

New streams of aesthetic and spiritual appreciation of nature emerge and evolve in the early republic's first century and to the end of the frontier.

Insights and corrections to the most prevalent narratives about religion and nature in North America from the emerging discipline of environmental history.

No weekly analysis is due on 4 October but students should be ready to address the readings during the in-class and take home portions of their mid-term exam.

6 October: The in-class portion of the mid-term exam will be administered 6 October in class and the take home essay section will be distributed. The take-home essay will be due 13 October before class and submitted as a word or rich text document by email. Students not in class that day will receive a 1 grade deduction on the essay portion of the mid term.

Religion and resistance to Darwinian thought and scientific nature religion

Documentary: Thinking Like a Watershed (1998) (or next week)
Readings (all)
Readings (grads)
Recommended

Students not in class on 13 October will receive a one grade deduction on the essay portion of the mid term that is due prior to that class.

Aldo Leopold, the Wilderness Society, and the breakthrough of explicitly biocentric environmental ethics.

Recommended: Wild By Law (The American Experience/PBS, 1992): on Marshall, Leopold & Zanheiser and the Wilderness Society.

* Special note: Fall 2016, these documentaries (and the one on Rachel Carson listed next weeks) will be shown on 20 October during a special documentary festival.
Assignment
Readings (all)
Readings (grads)
(Week 9) 20 October

Film: Welcome Ceremony, United Nations World Summit on Sustainable Development (Johannesburg 2002). View: Part One. Part Two.
Readings (required)
Readings (recommended)
Documentary
If time, from list, below.
In-class portion of final exam administered in class 1 December. The essay portion will be made available no later than 1 December and will be due by midnight 11 December.
RESOURCES
Writing Well
Documentaries
Motion Pictures (theatrical)
Television
Websites
ACADEMIC ORGANIZATIONS AND INITIATIVES INVOLVED IN ENVIRONMENTAL ETHICS:
Additional resources, such as links to podcasts, music, slideshows, video, music, and websites, will be made available here during the course. Students are encouraged to send their own ideas for resources to the course instructors.
Page load link
Go to Top