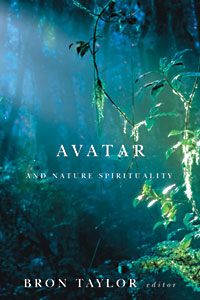 I first saw Avatar shortly after its release in December 2009. Like most viewers, I found the bioluminescent landscape of Pandora stunningly beautiful. I was also moved by the storylines: the against-all-odds resistance by the native inhabitants of Pandora against violent, imperial invaders; the turncoats from the invading forces who join the resistance; and the love stories. Sure, there is the formulaic story – male and female find love, lose love, and find it again – but there is also the love of a people for their home and their wild flora and fauna, a contagious love that subverts the ecological and spiritual understandings of some invaders, leading them to take a stand with those they have come to exploit.

The film’s producer, writer, and director, James Cameron, is adept at evoking emotional responses from his audiences and making huge sums of money along the way. Indeed, no one’s films exemplify the blockbuster, money-making film genre more than Cameron’s Terminator, Aliens, Titanic, and now Avatar, which banked $2.8 billion within the first two years after its release, 73 per cent of which came from outside of the United States.1 The figure would have been significantly higher had not the Chinese government cut short the film’s run, reportedly out of fear that it might encourage resistance to development projects and the government’s resettlement schemes (Stanton 2010). The film also gained wide recognition for its many technical innovations and won many awards, including best film drama and best director at the Golden Globe Awards (which is decided by the Hollywood Foreign Press Association) and three of the nine Oscars for which it was nominated (although not for best picture or director). The attendance records and professional accolades provide one marker of the film’s appeal. But is there more to the film than tried-and-true narratives of injustice being overcome and romantic dreams fulfilled? Is it significant in some way other than for its technical achievements and profit making?

When I first saw the film, I certainly thought this might be the case. For more than twenty years, I had been tracking the development and increasing global cultural traction of nature-based spiritualities, paying special attention to how such spiritualities contribute to environmental activism.2 My book documenting these trends, Dark Green Religion: Nature Spirituality and the Planetary Future (2010), came out shortly before the release of Avatar. In it, I argued that spiritualities that stress ecological interdependence and mutual dependence, involve deep feelings of belonging and connection to nature, and express beliefs that the biosphere is a sacred, Gaia-like superorganism, were taking new forms and exercising increasing social and political influence. These sorts of nature-based spiritualities generally cohere with and draw on an evolutionary and ecological worldview, and therefore stress continuity and even kinship among all organisms. They also often have animistic dimensions, in which communication (if not also communion) with non-human organisms is thought possible. Consequently, these “otherkind” are considered to have intrinsic value (regardless of whether they are useful in some way to our own species) and should be accorded respect, if not reverence. Uniting these Gaian and animistic perceptions, I argued, is generally a deep sense of humility about the human place in the universe in contrast to anthropocentric conceits, wherein human beings consider themselves to be superior to other living things and the only ones whose interests count morally.

In Dark Green Religion, I examined a wide range of social phenomena that expressed and promoted such spiritualities. Recognizing that the evolutionary-ecological worldview that fuels dark green spirituality has had only a century and a half to incubate and spread, and noting that despite this, the trends I had identified were rapidly gathering adherents and momentum, I speculated that we could be witnessing the nascent stages of a new global nature religion. Such a religion would have affinities with some aspects of the world’s long-standing and predominant religious and philosophical traditions, and it would, in some cases, fuse with them, I suggested. Moreover, such dark green spiritualities could also coexist (rather than fuse) with the environmentally progressive forms of the world’s long-standing religious traditions, uniting in common action to protect the biosphere, even if profound differences remained about the sources of existence. I also suggested that dark green religious forms might increasingly supplant older meaning and action systems, because the dark green forms more easily cohere with modern scientific understandings than religious worldviews involving one or more invisible divine beings. Consequently, the dark green forms could more easily adapt than most long-standing religions to new and deeper scientific understandings, especially when compared to religions that reify their “ultimate sacred postulates” by chiseling them, physically or metaphorically, into inviolable sacred texts.3

These were the possibilities running through my mind when I first saw Avatar. I had already spent considerable time looking at artistic productions, including documentaries and theatrical films that exemplified dark green spirituality; after seeing Avatar,I immediately thought it was another exemplar of such green religion. Moreover, as it broke box office records, I could not help but wonder if the film was evidence that global, cultural receptivity to the ideas prevalent in dark green religion was even more profound than I had previously thought. I also wondered if Avatar would prove to be the most effective “dark green” propaganda yet produced. In short, I thought, there might well be something exceptionally significant about the film, even if the ideas expressed in it were nothing new and even though some would conclude that the film was not great art. I suspected not only that Avatar was a reflection of the global emergence of dark green religion but that it might even effectively advance such spirituality and ethics.

In his public statements about the film, Cameron has expressed a clear intention to promote themes that are central to what I have called dark green religion. When accepting his Golden Globe Award for best picture, for example, he said: “Avatar asks us to see that everything is connected, all human beings to each other, and us to the Earth. And if you have to go four and a half light years to another, made-up planet to appreciate this miracle of the world that we have right here, well, you know what, that’s the wonder of cinema right there, that’s the magic” (Associated Press 2010). Soon after, in an Oprah Winfrey television special that was broadcast shortly before the Academy Awards ceremony, Cameron repeated this theme, adding, with delight, that at the climax of the film the audience had come to take the side of nature in its battle against the destructive forces of an expansionist human civilization. Here, without using the terminology of contemporary environmental ethics, Cameron expressed an affinity for deep ecological or biocentric theories, in which nature is considered to have intrinsic value. Indeed, according to an exchange during an Entertainment Weekly interview, it appears that Cameron was even on the radical side of biocentric ethics. When an interviewer asserted, “Avatar is the perfect eco-terrorism recruiting tool,” Cameron answered in an equally provocative way, “Good, good, I like that one. I consider that a positive review. I believe in ecoterrorism” (Moorhead 2010).4

In the light of such statements, it seems clear that dark green themes and activist motivations underlay the film’s production. Furthermore, the negative reaction to the film by most conservative commentators, whether political or religious, revealed significant concern that such views and imperatives might be gaining more adherents and cultural appeal. But while pundits and scholars speculated about the possible significance and influence of the film, they usually supplied little evidence to support their assertions. So I began to gather such evidence, establishing a website domain to track relevant information as it unfolded.5 I knew that a more concerted inquiry was needed.