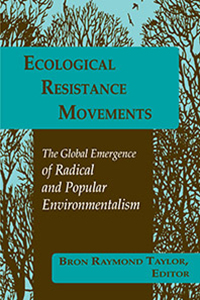 In the waning decades of the 20th century, ecologists have both described and predicted the collapse of natural ecosystems and widespread species extinction. Meanwhile, social scientists argue that the ecological deterioration detailed by these ecologists fuels the social conditions of famine, refugee displacement, ethnic rivalry, and violent social conflict (Homer-Dixon 1991; Homer-Dixon, Boutwell and Rathjens 1993; Kaplan 1994). Some even observe that such calamities erode the legitimacy and power of nation-states, often in direct proportion to their inability to resolve problems of environmental decline (Lipschutz and Conca 1993; Lipschutz and Mayer 1993; Rosenau 1990, 1993; Habermas 1983). Meanwhile, grass roots environmental organizations have proliferated and have become increasingly assertive. This development has further escalated social conflicts related to environmental decline.

This book is about grass roots environmental groups who are fighting against environmental degradation. Some of these groups, like those in the international deep ecology movement, hope to overturn the anthropocentrism of Western Civilization, an orientation they regard as a central cause of environmental problems (Devall and Sessions 1985). Others emerged from a variety of oppositional political movements (anti-colonial, national independence, anti-nuclear, Marxist, Feminist, Gandhian, etc.) as activists recognized the importance of ecological issues to their interests and objectives. Many of these groups have only recently assumed an "environmental" character. Still others, whose members were initially motivated by reformist environmental concerns, were radicalized by their experience of public indifference and organized corporate and governmental resistance to their ecological efforts.

These ecological resistance movements express a variety of critical ideas and employ a range of tactics which sometimes, in one way or another, appear to be "radical" or "militant." But the diversity of these movements makes it difficult to find an adequate umbrella term of reference for them. Uncritically labeling all these groups "radical" or "militant" can be misleading. Many of these groups eschew such labels.1 Still, definitions are important. Although they often contain biased presuppositions which can lead an inquiry astray, without them, it is difficult to focus an inquiry. Perilous though it may be to begin with an umbrella term for the movements examined in this volume, some term of reference is required.

We refer to these groups inclusively as popular ecological resistance movements, a phrase inspired by Latin American social scientists who refer to non-middle-class, peasant, indigenous peoples and participants in underground economies. Yet we expand upon this definition to include populist environmentalists (who may be from middle-class backgrounds), such as members of the U.S.-based "environmental justice" movement and the "back-to-the-land" movements in Western countries such as Australia, the United States, and Ireland (Tovey 1993). Any single term of reference for the diverse movements explored in this volume will be problematic. Indeed many of the specific chapters struggle with questions about how we should conceive of these movements. Nevertheless, as the chapters unfold, what we mean by "popular ecological resistance" will become clearer. (We do not mean, for example, that all these movements are well liked or enjoy widespread support; often they are not even well known.)

This book focuses exclusively upon popular environmental resistance movements because of the dearth of scholarly attention paid to them. One reason for this lack of attention is that many such groups have recently formed--or have only recently assumed an environmental agenda. Moreover, analysts tend to focus upon well-established and mainstream environmental movements. Another reason for the lack of attention may be the tendency of social scientists to focus on the politics within and between nation-states. For these reasons, and perhaps others, ecological resistance movements have not received the scholarly attention one might otherwise expect.
Four lines of inquiry
This volume pursues the description and interpretation of these movements along four central lines of inquiry. The first illuminates these movements as much as possible through first-hand observations and interviews, often supplemented by documentary research. The second examines these movements in the light of social movements theory. The third discusses in a more theoretical way the philosophical and moral views represented by some movement participants. The fourth attempts to assess the impacts and prospects of the movements described in this volume.
1) A descriptive tour of ecological resistance

The central goal of the descriptive line of inquiry has been to understand and represent these diverse movements on their own terms. Specifically, we set out to describe movement participants' own perceptions about their ecological predicament, their understandings of the cause(s) of their predicament, and their proposed prescriptive remedies. We also endeavored to hold in abeyance any assumptions that these movements might be similar. Instead, we hoped to allow generalizations to emerge from our collaborative observations, rather than attempting to use observations to prove preconceived theoretical ideas.

In section one, we begin our descriptive tour of ecological resistance in the Americas. Chapter one analyzes the spiritual politics of Earth First!, and the tendency of some "radical environmentalists" to view the global proliferation of grassroots environmental activism as an outbreak of deep ecology. This chapter poses problems that the following contributions help answer. Next, Bob Edwards examines the "environmental justice" movement. He illustrates, among other things, the increasing role ethnic minorities are playing in environmental activism in North America. Lois Lorentzen then introduces us to home-grown "eco-feminism" of women's environmental movements in Central America, and Heidi Hadsell leads us to an agrarian community of river dwellers far up the Amazon River in Brazil, who are struggling to overturn unsustainable resource exploitation in their region.

In section two, we begin a voyage to Asia and the Pacific through Al Gedicks's discussion of indigenous environmental resistance. Using case studies of such movements in Canada, the United States, Ecuador, and then in Malaysia, Gedicks stresses the central role indigenous communities are increasingly playing in struggles over resources and land practices. Next, Larry Lohman discusses Thai social movements which have captured the imagination of Western environmentalists, and cautions sympathizers not to view such movements uncritically through Western lenses. Vikram Akula focuses on the diverse popular environmental movements of India, while Emma Porio discusses grassroots struggles for resources in the Philippines which increasingly have assumed an "environmental" character.

In section three we continue on to Africa. Here the contributions of Yash Tandon and Ben Wisner paint a landscape where struggles for independence, democracy, women rights, and land increasingly blur with environmental concerns into social movements that are both old and new. Here again we learn how very different environmental movements in less affluent countries can be from those found in Western countries.

In section four, the final one organized geographically, we wander north to Europe. Here David Rothenberg provides a good feel for the essence of deep ecology, which has its origins in Norway. He simultaneously explores the increasingly violent conflict between the Norwegian government and the militants of the Sea Shepherd Conservation Society, who sink whaling ships and otherwise interfere with Norwegian efforts to resume whaling. Next, Wolfgang Rudig offers a history of the emergence of and obstacles to ecological radicalism in Britain, while Brendan Hill and colleagues introduce us to a little known movement in the Scottish Highlands where Celtic renewal and nationalism are linked to the quest for land rights, ecological restoration, and various forms of ecological radicalism.
2) Ecological resistance and social movement theory
A second line of inquiry uses current social movement theory to explain the dynamic interplay of macro-structural, organizational, and cultural factors in the emergence, development and impact of popular ecological resistance movements. Macro-level analysis considers broad changes in the structure of economic and political relations and the incursions of state and corporate power into formerly private spheres of life (Melucci 1989; Offe 1985). Social movement theory attends to how the structures of everyday life, culture, indigenous forms of organization, and shifting structures of protest traditions influence the emergence, activities and impacts of social movements (McAdam, McCarthy and Zald 1989; Morris and Mueller 1992). It also examines how such factors influence the tactics such movements choose and the narratives they produce. A number of this volume's contributors weave this line of inquiry into their analysis by considering whether the case studies add meaningfully to current discussions of social movement theory.
3) The challenge to modernity
A third line of inquiry examines the manner in which popular ecological resistance movements challenge the philosophical, moral, and religious underpinnings of modern society. Found especially in the final, "concluding reflections" section, the contributions by Dan Deudney and Jerry Stark focus most specifically on these matters, providing competing perspectives about whether the philosophical and moral claims posed by deep ecology, and other forms of nature mysticism, are promising or compelling. These chapters especially help to bring into focus personal questions regarding what sort of environmental ethics and politics we should endorse.
4) The impacts and prospects for ecological resistance movements

A forth line of inquiry examines the impacts, prospects, and obstacles facing ecological resistance movements. Most of the case studies provide some analysis along these lines, but the final three chapters especially prioritize such assessment. Paul Wapner analyzes the international influence of Greenpeace, while Sheldon Kamieniecki and his colleagues focus in-depth on the effectiveness of radical environmentalism. At the end of the volume the editor also discusses the impacts and prospects of these movements, as well as "trends and tendencies" that can be discerned among them. Specifically the editor suggests that patterns in the perceptions of movement participants about the causes of their environmental predicaments, and in their prescriptions, make it possible to label these diverse movements "radical," if this is understood in a limited and qualified way.

Because these movements have received so little scholarly attention this volume places a premium on careful description. There has been no effort to impose a single analytic lens or point of view. Indeed, several chapters disagree about fundamental issues, others pose their own research questions and raise new theoretical issues, still others urge analytic caution by addressing difficulties in comprehending or generalizing about these movements.

The case studies assembled in this volume are not exhaustive. Nor have we fully discussed every issue in social theory or environmental philosophy raised by them. Nevertheless, this volume provides an unusual and complementary balance between description and theory, supplying insights from a variety of disciplinary perspectives. Moreover, the rich descriptive data the contributors have provided can be mined for additional theoretical purposes and arguments by others. But perhaps the greatest contribution of this volume is that it offers those who embark on this global tour of popular ecological resistance a unique opportunity: to think afresh about a variety of pressing ecological, political, and moral issues that are raised by the emergence of these movements.
Notes

For example, in an uncritical and unqualified way, some observers label all these movements "radical environmentalism." By providing in-depth description and analysis of a variety of these movements, the present volume serves as an antidote to such oversimplifications.

2. I wish to thank Bob Edwards for clarifying social movement theory for this non-specialist.

3. The distinction between description and theory is useful, but often overdrawn. Descriptive work always involves an interpretive dimension and theoretical premises.